Day 1: FETHŻYE Boarding starts at 15.30 from Fethiye Harbour. While you settle in, dinner will be served on the yacht and we will stay an overnight on board in Fethiye Port. Fethiye, which was known as Telmessos in the ancient times, was the most important city situated on Lycia's western border with Caria. It is believed that the city's name comes from Apollon's son Telmessos. The city joined the Ottoman Empire in 1924. The name changed many times over the years and was eventually named Fethiye in memoriam of Fethi Bey in 1914, one of the first martyrs of the Turkish Air Force, crashed his plane and died there when he was on duty. In the south part of the town you will see many famous tombs and graves from the Antique Era and one of the most famous and most beautiful stone tombs is the tomb of King Amyntas. The ruins belonging to a theatre, which have been discovered recently during the excavation carried out by the museum, are in the city centre.
2: ÖLÜDENŻZ - GEMŻLER ISLAND
 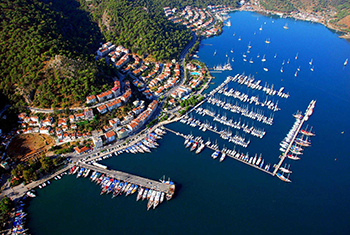 2: ÖLÜDENŻZ - GEMŻLER ISLAND After breakfast, you will be informed about the cruise itinerary and the boat. We will start our cruise to Ölüdeniz. Our yacht will be anchored in Ölüdeniz for lunch and a swimming break. The next stop will be Gemiler Island. It is recommended to have an early evening walk on Gemiler Island and pay a visit to the Church of St. Nicholas, located at the top of the island, which remains from Byzantine times. Dinner and an overnight stay will be in the Gemiler Strait.
Day 3: YEŽŻLKÖY - KAŽ
 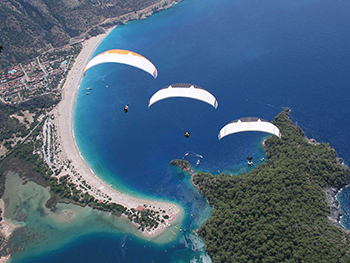 Day 3: YEŽŻLKÖY - KAŽ We will cruise early in the morning to cross Yedi Burunlar (Seven Capes) smoothly. We will anchor at Yežilköy Bay, which is close to Kalkan, for breakfast and a swimming break. Then we will cruise and anchor at Kaž Harbour. In this ancient Greek Town, you will have the chance to walk around and to experience the night life. Being one of the most important towns of Lycia, Kaž gained importance in Roman Times and eventually became the centre of Episcopacy in Byzantine times. Kaž is a rich land with the surrounding cities that belong to the Antique period and with other historical values.
Day 4: KEKOVA - TERSANE - ÜĒAŠIZ
 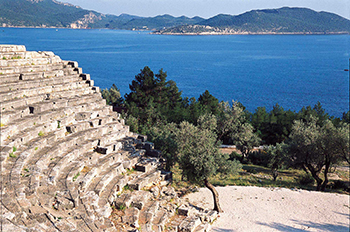 Day 4: KEKOVA - TERSANE - ÜĒAŠIZ After breakfast, we will cruise to the sunken city of Kekova. Here we will stop for a swimming break and for lunch at Tersane Bay where you will see an old shipyard from the Roman Period and a church from the Byzantine times. For dinner and an overnight stay the gulet will anchor in Üēašżz Bay.
Day 5: SŻMENA - DEMRE - GÖKKAYA
 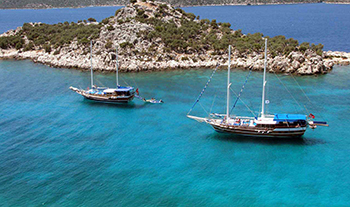 Day 5: SŻMENA - DEMRE - GÖKKAYA After breakfast, we will anchor at Kaleköy (Simena), where you will have the chance to take one of the most beautiful photographs of Antique Lycia. For lunch and swimming break, we will cruise to Demre. Here you can join an optional tour from Ēayašzż Bay to the ruins of Myra, a Lycia city which was also the city of the Bishop St. Nicholas who was known as 'the protector' of the children, the poor, and the sailors in Byzantine time. We will anchor at Gökkaya Bay for dinner and an overnight stay.
Day 6: LŻMAN AŠZI BAY - HŻDAYET BAY - FIRNAZ BAY
 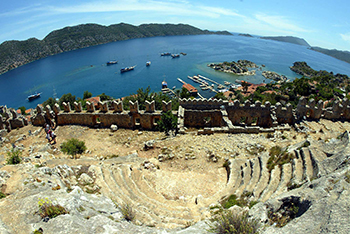 Day 6: LŻMAN AŠZI BAY - HŻDAYET BAY - FIRNAZ BAY We will cruise early in the morning. Breakfast will be served on the way. If the weather conditions permit, we can stop for a swimming break at Kabutaj Beach. Then we will anchor at Liman Ašzż Bay and have a swimming break there. The lunch will be given at Hidayet Bay. For dinner and an overnight stay, we will anchor in Fżrnaz Bay.
Day 7: BUTTERFLY VALLEY - TURUNĒ PINARI BAY - SAMANLIK BAY - FETHŻYE
 Day 7: BUTTERFLY VALLEY - TURUNĒ PINARI BAY - SAMANLIK BAY - FETHŻYE An early start to the day will enable us to cruise to Turunē Pżnarż Bay. If the weather conditions permit, we will stop at Butterfly Valley for a swimming break. We will anchor at Turunē Pżnarż Bay for the lunch. After lunch, we will anchor at Samanlż Bay for a swimming break. The dinner and an overnight stay will be in Fethiye Harbour.
Day 8: FETHŻYE
 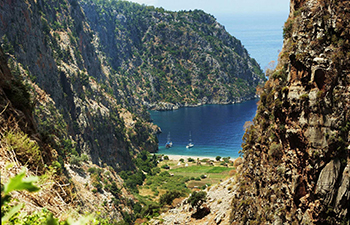 Day 8: FETHŻYE The guests will leave the boat with precious memories by 10:30 after breakfast.

Depending on sea and weather conditions, Barbaros Yachting reserves the right to make necessary changes to the tour itinerary to ensure the safety and comfort of our guests.