Motor Sailer :
A Motorsailer, aka "motorsailor" (US), is a type of sailing vessel, typically a pleasure yacht, that derives propulsion from its sails and engine(s) in equal measure.[1]

Whereas most sailing yachts above a certain size will usually have an inboard engine, they will not be "motorsailers", as their principal source of power is sail, and the engine is only for auxiliary drive and maneuvering. A sailing yacht with an auxiliary engine will typically have a small propeller that automatically feathers when sailing, whereas a motorsailer may have either a large fixed propeller or, ideally, a variable-pitch propeller.[2] Compared to such "pure" sailing yachts, a motorsailer will typically be heavier-built, with less delicate lines but with more spacious accommodation. A motorsailer will have an enclosed cockpit, or "doghouse", whereas a pure sailing yacht would have an open cockpit. A motorsailer may have a higher freeboard, and, coupled with the doghouse and other superstructure, will have considerable side windage. The motorsailer's sail area will typically be rather smaller than an equivalent yacht's, and any masts may be shorter. Also, while a sailing yacht will often be rigged as a Bermuda sloop or a Bermuda cutter (both types having a single mast), the motorsailer will more likely have a multi-masted split-rig, such as a schooner, ketch or yawl.[3]

While the sailing yacht appeals primarily to the purist sailing enthusiast, the motorsailer is more suited for long-distance cruising, as a home for "live-aboard" yachtsmen.[4] The special features of the motorsailer (large engine, smaller sails, etc.) mean that, while it may not be the fastest boat under sail, the vessel is easily handled by a small crew. As such, it can be ideal for a retired couple who might not be able to handle large sail areas. In heavy weather, the motorsailer's large engine allows it to punch into a headwind when necessary to make a landfall, without endless tacking to windward.

Fethiye :
Fethiye, which was known as Telmessos in the ancient times, was the most important city situated on Lycia's western border with Caria. It is believed that the city's name comes from Apollon's son Telmessos. As the name suggests, the city was the city of light and was famous for its prophets. Fethiye stretches in a half circle along the bay protected by 12 Islands.

We have 3 different, guarenteed departures for Cabin Charter routes, that includes the itinerary of Fethiye. 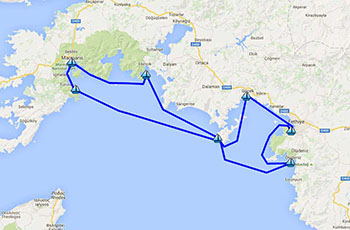 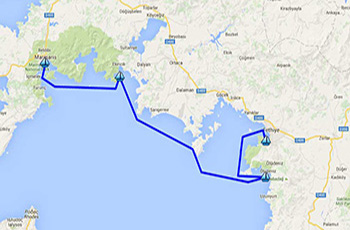 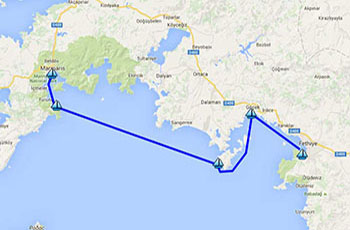